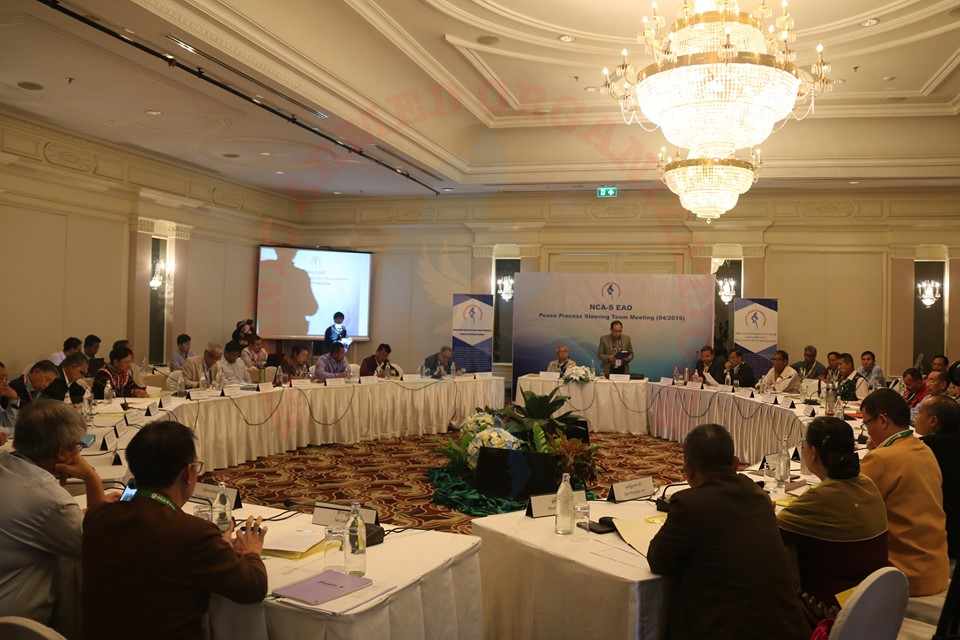 The opening remark is as follows:

Firstly, I’d like to extend my wishes to all the leaders attending the PPST meeting. I am honored to have the chance to deliver the opening remarks as an Interim Team Leader.

The main topics to be discussed in this meeting are ways to overcome the deadlock in peace process; ways forward for peace process proposed by the Union Government; the 21st Century Panglong Union Peace Conference, and the group cohesion of PPST as well as many other important issues.

A working group has been established by the fourth NCA-S EAO Summit (1st session)) to find ways to overcome the deadlocks in peace process. In this meeting, we will discuss and endorse what they have been prepared. Moreover, we will need to set up some further specific principles for the peace process in the context of before and beyond 2020.

It is very important to have a common position in regards to the Government proposal of “ways forward for peace process” to proceed. We should consider whether they are in line with our position of overcoming the deadlock of peace process.

On the other hand, we really need to have a further discussion whether the 4th round of so called 21st Century Pang long should be assembled or not while the government and political parties are suggesting to organize it in late 2019 or early 2020. It is also necessary to predetermine some principles on expected results if the Conference is organized.

The group cohesion of PPST will be discussed thoroughly in this meeting. We need a structure that ensures a win-win situation for us. We need to develop a solid, concrete and reliable structure.

Meanwhile, the peace process has been in a deadlock situation for over a year, therefore, it is crucial that negotiation between both sides must be resumed for the interests of citizens as well as the Union based on the justice and compromise therefore meeting the common ground. We need to make an effort to find a common ground fair and square.

Almost four years have passed since Nationwide Ceasefire Agreement-NCA was signed, there is no sign of concrete principles outcome in terms of building a Federal Union if we look back. Hence, we must keen on focusing on basic foundation of Federal Principles in order to contain into the Union Peace Accord.

Since attaining independence in 1948, the country has embraced civil wars that result extreme poverty, therefore the people of the country have fallen into the lowest living standards.

To conclude, we must prioritize the interests of people and the interests of the Nation by building a Federal Union as everyone has been longing for based on patience, honesty, trust, mutual respect and mutual recognition, compromise, and justice. In the end, we will surely reach our goal.