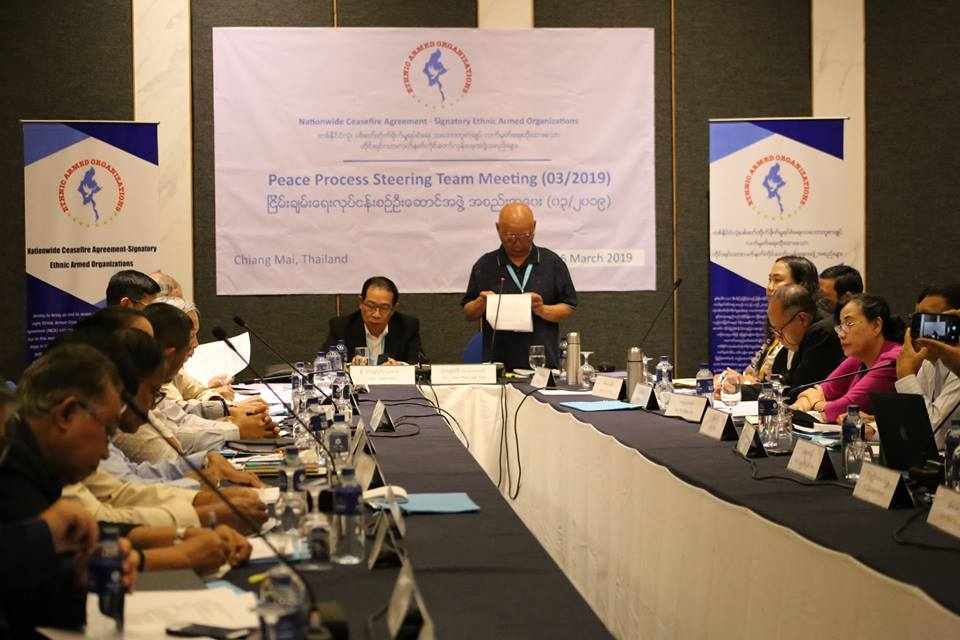 NCA-S EAO Peace Process Steering Team Meeting (03/ 2019) has been held in Chiang Mai, Thailand from 5 to 6 March 2019. This meeting is the very first one following the special meeting between the top Government Leaders and the counterparts of NCA-S EAO which took place 15 October 2018. The relevant top leaders of NCA-S EAO, PPWT (Peace Process Working Team) members and the technical assistants have been attending the meeting.

The Opening Remark Delivered by General Saw Mutu Sae Poe at Peace Process Steering Team's Extra-Ordinary Meeting
5 March 2019, Chiang Mai
------------------------------------------------------------------------------
Good morning everyone. Today’s extra-ordinary meeting has been called with the aims of discussing and negotiating on the process of implementation of NCA between PPST and Lahu Democratic Union and New Mon State Party. This meeting is also aimed to reevaluate perspectives and degrees of achievement of the ultimate goal set on the peace process. I would like to, firstly, express my gratitude and cordial welcome to leaders, delegations and all attending to this extra-ordinary meeting.
Despite my role at this meeting as a PPST chairman, the implications in my speech will reaffirm the political stands of KNU and RCSS that are placed upon the peace process. Therefore, I would like to urge every PPST member to pay your immersed attention in discussions and get digested on what is discussed. And I would like to emphasize my desire of reaching the common ground, through and after this meeting, among NCA signatories.
Track of implementation of NCA in the currently given political trend has strayed from that through which we originally intended to build this country as a union based on democracy and federal system guaranteeing full of national equality, self-determination, rights and guarantees.
It is crucial to redirect the track gone astray after logical deliberation of the whole course. If the current track appears to be an integral part of the change as it occurs, thorough negotiation and discussion among all parties must be done so as to digest the trend but without defying prescriptions in NCA.
In light of redirecting the track gone astray, an open letter involved (3) points to be discussed was sent to state counselor- Daw Aung San Suu Kyi- and commander in chief of Tatmadaw with the signatures of KNU chairman and RCSS chairman on 11 October, 2018. A discussion on this letter is encouraged to take place among us. From the discussion common ground will be reached and subsequently consider for the ways forward.
Copies of the said letter have been already sent to every member of PPST that signed NCA. And I believe the leaders and delegations attending this meeting must have brought stands or regards of your organizations.
We, the KNU and RCSS, have perceived a positive and better move need to be made to proceed from the current status of stalled peace process. This is a reason why this extra-ordinary meeting was called, which will focus on thorough negotiation and discussion.
Discussions on evaluation of agreements reached upon under NCA text, track gone astray, current positions we have come far and practical circumstances have been held either collectively among all of us or at every single organization concerned.
As today’s meeting is an extra-ordinary meeting, thorough discussions and negotiations must be done with the spirit of unity among us. Based on the collections from this meeting, a firm decision shall be made by concerning organization respectively.
We, the KNU and RCSS, have the following regard for future measures after considering current practical circumstances faced by PPST member organizations composed of diverse grounds. At this extra-ordinary meeting we, the KNU and RCSS, have a proposal for transforming into a meeting of negotiation where a common goal, after digesting the discussion and negotiation on the formation of PPST, can be jointly implemented.
In accordance with the proposal, KNU and RCSS have hereby informed everyone of proper replacement to make for our delegations of PPST meetings.
To conclude, I would like to encourage to make cooperation and collaboration for moving forward to achieve the goal of democracy and federalism. But this must be done by seeking common goal and recognizing unity in diversity which is the core essence of democracy.