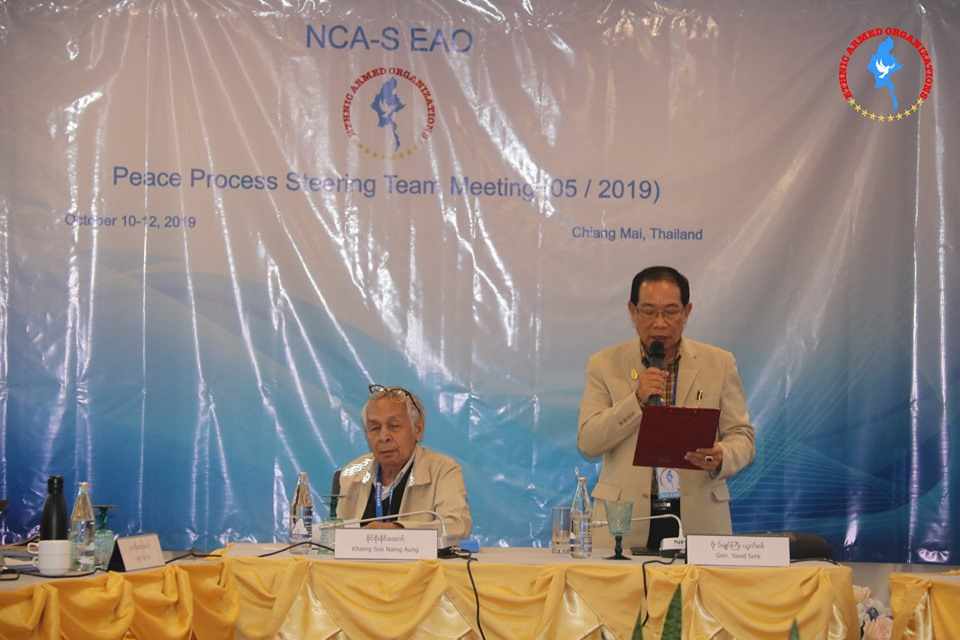 General Yawd Serk, the Acting Team Leader of PPST, delivered the closing speech at PPST Meeting (05/ 2019), held in Chiang Mai, Thailand from 10 to 12 October 2019. The closing speech of Gen. Yawd Serk is as follows:

As the Acting Team Leader of PPST, I would like first to thank all the leaders who had enthusiastically discussed for a good result during the 3-day meeting.

We have managed to form NCA-S EAO’s Delegates to lay down a program jointly with the government to hold a meaningful and substantive ceremony of the fourth anniversary of NCA signing.

We have also managed to lay down our policy to hold preparatory coordination meeting for holding Joint Implementation Coordination Meeting (JICM) on Nationwide Ceasefire Agreement (NCA).

We have agreed that Negotiation Team would strive at every level of work laid down in coordination to convene the fourth session of the 21st Century Panglong.

In addition, we were able to achieve a common ground in this meeting connection with international assistance for development projects and agreed what responses should be made for trust building between the government and NCA-S EAOs.

We have sought ways and means for all inclusive participation at every level in the peace process and building a federal union. We have considered all possibilities.

We, who have been waging armed revolution for political reason, had signed NCA with the hope for building a federal union and solving political problems by political means.

This is a time for working towards a peaceful and prosperous country that is ours. To do so, it is imperative that we implement the provisions of the 1947 Panglong Agreement.

For the development of our country, we should practice a federal democratic system suitable to our country. It is necessary to courageously repel a dictatorial administrative system under the cloak of democracy. Malaysia and Singapore regained independence later than us. But since they had chosen the right political system, they are the countries abreast with the nations of the world in every field.

We could reach our goal very soon if we act with equality, justice, trust, reciprocal respect and recognition, absence of bullying and wishing to get the upper hand, fairness and kindness.

So that the peace process does not backtrack, we all must preserve it. Just as it is necessary for the government and the Tatmadaw to make some compromises, we, the EAOs should also work for fairness to both sides. If the peace process breaks down, the country would become poorer and poorer with the prospect of not recovering from poverty.

Just as we all are going to strive to make the stages of the peace process and the building of a federal union post 2020 an important agreement of the 21st Century Panglong, we should consider from different perspectives when we are experiencing political, military and economic instabilities, I would like to conclude by inviting you to join hands together putting in the forefront the betterment of the Union suitable to time, place and fairness to all. Thank you all.