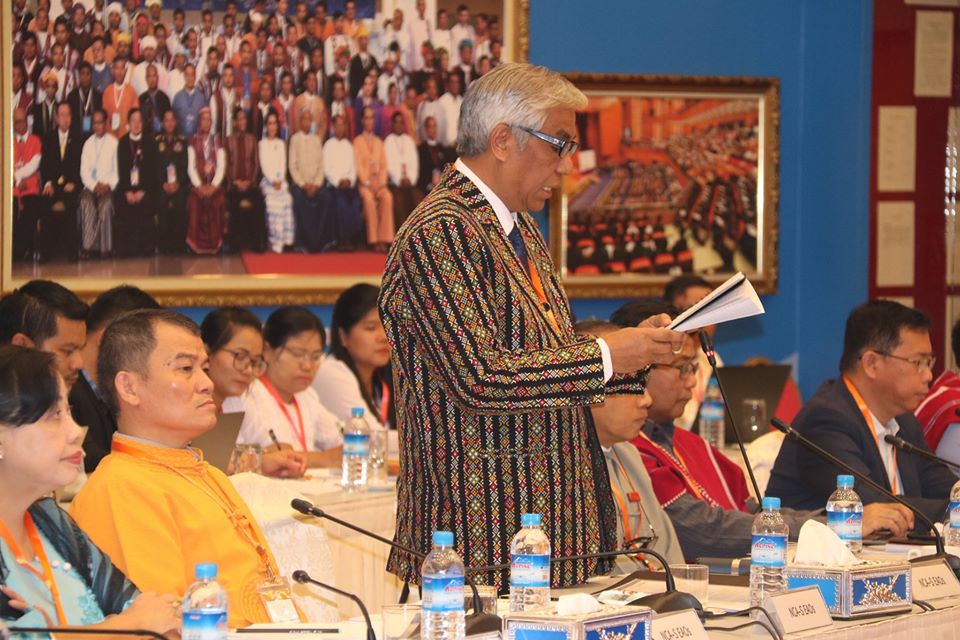 Dear honourable Daw Aung San Suu Kyi, the Chairperson of Union Peace Dialogue Joint Committee Meeting (UPDJC) and the State Counsellor of the Republic of the Union of Myanmar, and vice presidents of UPDJC, secretaries and committee members,

It is my honour to deliver an opening remark on behalf of NCA-S EAO (Nationwide Ceasefire Agreement - Signatory, Ethnic Armed Organizations) in this special occasion of the 18th UPDJC Meeting. I would like to greet you all by saying ‘Mingalabar.’ As you all are aware, UPDJC is a body that leads, supervises and takes responsibility for every level of political dialogue process. Therefore, this Committee plays a vital role in achieving lasting peace in the country.

The objectives of political dialogues led and supervised by UPDJC have been clearly stated in the basic principles of NCA. Out of these, I would like to highlight two of the main objectives here. According to NCA’s basic principle (1) (a), it is agreed to establish a union based on the principles of democracy and federalism in accordance with the outcomes of political dialogue. In NCA’s basic principle (1) (b), it is also noted to reach a negotiated settlement to end protracted armed conflict in the Republic of the Union of Myanmar, secure a nationwide ceasefire as a first step to end armed conflict and establish a new political culture of resolving political conflicts through political dialogue instead of force of arms. The main spirit of these principles is to end the civil war that lasts more than 70 years.

I would like to highlight some of the challenges that we faced by giving an example. Reflecting back to the second Union Peace Conference - 21st Century Panglong Conference held in May 2017, we adopted the Bottom-Up approach in the dialogue structure. Through the bottom-up approach, there were many proposals from the outcomes of national dialogue, and other respective groups. Therefore, in some thematic areas, especially political sectors where I am involved, there are dozens of proposals from the bottom that we, UPDJC, could not handle them all. But it does not mean our approach was wrong or right. Instead, it is just an example to clarify that we had faced many challenges in terms of technical issues.

Similarly, although we held National Dialogues in many places for the Union Peace Conference - 21st Century Panglong Conference (3rd Session) held in July 2018, we did not have a chance to discuss any topics under the Framework for Political Dialogue in either thematic areas or in respective groups. You may already be aware that the Union Peace Conference became like the public forum when we discussed new proposals of the new ideas from different representatives even though some of the proposals had already been discussed ahead of the Conference within each sector Working Committee. You may also be aware that we came into agreement only 14 points for the Union Accord even though we discussed many topics during the Conference.

If we could reflect and take all these experiences as lessons, it is crucial to realize that UPDJC is not like a government that is responsible for handling all issues related political, economic, and social in the country. Nor is UPDJC the legislative branch of a country that drafts bills or enacts laws. It is also essential to be aware that all the UPDJC led political dialogues are not public forum that bring each and every desire of the people to the agenda. UPDJC in fact is a Committee that solely work for the sake of achieving on lasting peace. Therefore, we, as the UPDJC and within assigned duty and authority; need to prioritize our duty and responsibility.

We have been encountering deadlocks while working on the peace processes. However, we have been trying to overcome those barriers with many approaches and methods. We also had a top leaders’ meeting (10+10) in October 2019 for overcoming stalled due to political impasses. Subsequently we held the 8th JICM meeting on 8 January 2020; I would like to express here my heartfelt thanks to JICM as it has led to overcoming most of political deadlocks. Not only were eight-point agreements reached at the 8th JICM meeting, but we also had some progress in revising political dialogue structure of the peace process. You may have witnessed that the former approach “bottom-up” has been revised by adopting the new approach “top-down” that allow the flow of guidelines and policies from top leaders’ meeting, and then to the general public. We can also note as this new approach as a “mix-model approach” as these two approaches would be utilized based on prerequisite in this peace process. Once again, I would like to express my heartfelt gratitude to JICM, honourable delegates from the union government, and respected leaders of PPST for letting this happen.

I sincerely request representatives of Political Parties’ group for your kind tolerance and pardon for yet excluding in the JICM meeting that aims to overcome the current political impasses. I hope you all understand the circumstance as we have an agenda to explain the outcomes of the 8th JICM meeting in today’s meeting. In this meeting, not only will outcomes of the 8th JICM meeting be presented, but we will also discuss on the topic of the Framework for Political Dialogue, ToR of UPDJC, ToR of UPDJC secretariats, thematic Working Committees’ ToR and matters relating to National Dialogue. Therefore, I would like to request for your patience and cooperation in a constructive way on each topic and subject matter in this meeting.

If only we cooperate in achieving firm decision with collaborative negotiation in today’s meeting, it would be possible to hold the 4th Union Peace Conference - 21st Panglong (3rd session) before the end of April as per the 8th JICM meeting’s resolution (5).

As you all know, holding a Union Peace Conference is our primary responsibility; which is also the hope of all union born ethnic nationals to long for lasting peace. Therefore, I kindly would like to urge all respected delegates that are here today to participate with your full efforts to achieve our goals.

To conclude, may I kindly request for your endeavour during this today’s meeting to come together to support and find the solution for our union’s problems, making peace process with Union spirit, Panglong spirit instead of prioritizing our individual and organizational interests. Thank you very much.