The Negotiation Meeting between the Government and NCA-S EAO held in NRPC, Yangon Yesterday 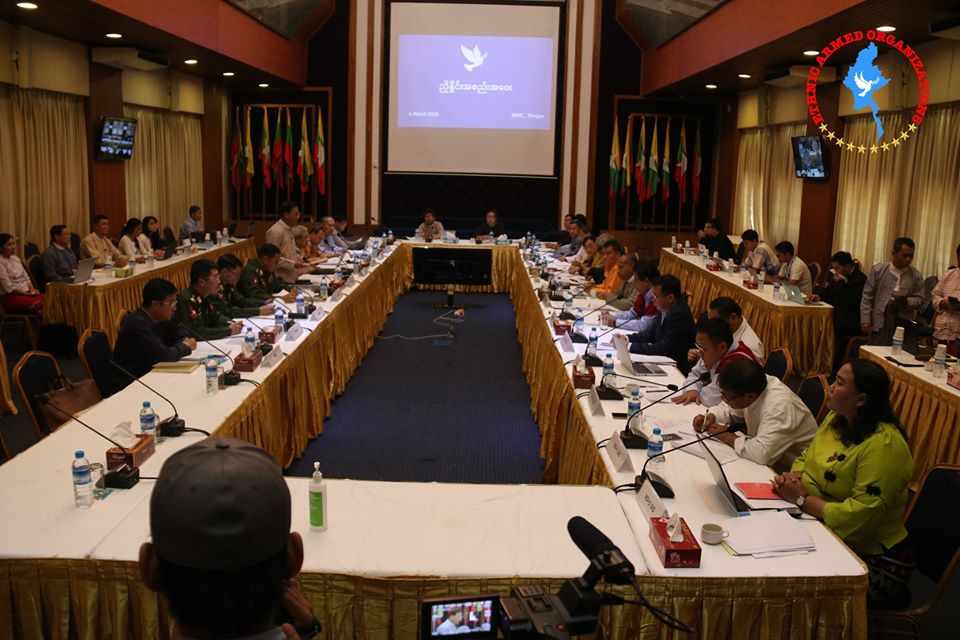 The Negotiation Meeting between the Government and NCA-S EAO started to be held on 6th March in National Reconciliation and Peace Center located in Yangon. The meeting is supposed to end today. Col. Sai Ngern, the Negotiation Team Leader from NCA-S EAO, delivered the Opening Remarks at the meeting. The Opening Remark of Col. Sai Ngern is as follows:

Speech of Col. Sai Ngern, leader of the NCA-S EAOs negotiating team, on the third negotiation meeting between the government and NCA-S EAOs

May I begin by extending my earnest message of greetings to each one of you, leaders and representatives of both the government and ethnic armed organizations (EAOs), who are at this important meeting! I wish you all a good health and happiness!

We are gathering here to discuss the combined proposal – put together by a small team from both sides- that contains two of the separate proposals of the government and EAOs in accordance with our given task to implement the 8-point agreement at the 8th JICM Meeting. Moreover, we are also going to have a detailed discussion of the respective proposals that each negotiating team brings back after consulting with our senior leaderships from both sides.

As we prepare for securing agreement, which would be included in the anticipated third segment of the Union Accord (UA), we do have to discuss some specific items that include (a) agreement concerning the implementation of the NCA, (b) adopt step-step work plan and stages of implementation strategy for peace process beyond the year 2020, (c) agreement on basic federal principles, (d) programs regarding the holding of national-level political dialogue, (e) matters concerning the preparations for convening UPDJC meeting, and other relevant issues that we need to discuss.

As already decided at the 8th JICM meeting, we also have to revisit this question of possible ways to include members of the EAOs - that have not yet signed the NCA – so that they can take part in the peace process and its related activities in future.

As we continue our discussion and negotiation in our current political dialogue, I strongly believe that we need take into consideration and make a reference back to ‘the five basic principles regarding the establishment of a democratic federal Union in our country’ that Honorable Daw Aung San Suu Kyi, the State Counsellor has already articulated in her speech at the ceremony of the 4th anniversary of the signing of the nationwide ceasefire agreement (NCA) on 28th October, 2019.

In accordance with the article 22 (d) of the NCA agreement, which stipulated, “We agree that all decisions of the Union Peace Conference (UPC) shall be the basis to amend, add, and repeal the existing clauses and articles of the Constitution and all laws as necessary. On the other hand, the Commander-in-Chief of armed forces, Senior General Min Aung Hlaing, also stated, “ it would be more practical to contemplate ideas and suggestions of what additions we need to make to the existing schedule 2,3, and 5 of the constitution so that improvement can be made”. I raised these important points because it is essential that we factor into some of our important agreements as well as the speeches of our leaders in our ongoing discussion and negotiation.

This meeting is our third negotiation meeting as you all know. To be able to reach this stage of holding the current meeting, I understand that the government side has done a series of your own consultation meetings just like we, the NCA-S EAOs, also have held a series of preparatory meetings among us. I also understand that each of us have made effort to understand the views of each side so that we are fair to each other in this ongoing negotiation. As we lead this process of negotiation, there are times when we have to be mindful of harmonizing the respective interests of each individual organization, collective bloc, and all of us. At the same time, there are also times when we have to restrain ourselves cautiously to avoid division among us. By all means, from this third negotiation meeting towards achieving our current objective of convening the 4th Union Peace Conference (21st century Panglong) within the timeframe that we want, it is crucial that we patiently discuss and negotiate any issue in our meeting with mutual understanding and the spirit of cooperation between the representatives of our two negotiating teams.

We, as signatories to the NCA, have obligation to comply with the terms and condition of the NCA in anything we do.  We will not only aim to hold the 4th Union Peace conference (21st century Panglong) successfully, but we will also make collective effort to demonstrate the essence, robustness, momentum, trust, mutual recognition, and equality that we can achieve through the NCA.

In line with what we already agreed at the NCA article 1 (b) that stated, “We shall reach a negotiated settlement to end protracted armed conflict in the Republic of the Union of Myanmar, secure a nationwide ceasefire as a first step to end armed conflict, and establish a new political culture of resolving political conflicts through political dialogue as opposed to resorting to the force of arms,” we shall resolve any issue in our political dialogue, be large or small, through a peaceful mean of consultation and negotiation as we already pledged.

Let me conclude by saying that, the main reason why we are making relentless effort despite facing enormous challenges, obstacles and difficulties in our ongoing peace process is because what we do today - and the overarching goal of our undertaking - is for the best interests of all citizens of our common Union and the entire nation. Thank you very much!