The Negotiation Meeting between the Government and NCA-S EAO held in NRPC, Yangon 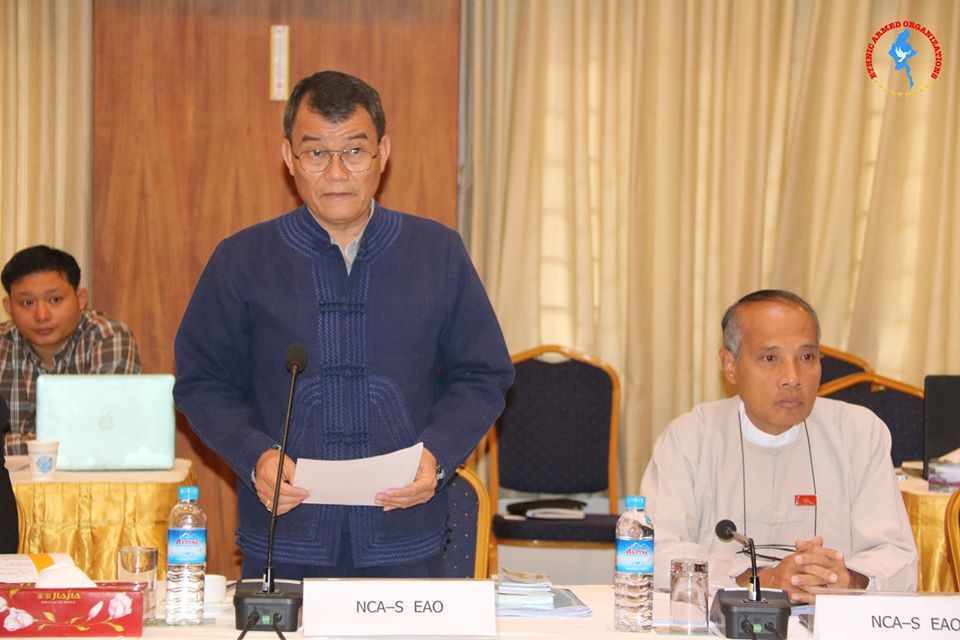 The Negotiation Meeting between the Government and NCA-S EAO has been held in National Reconciliation and Peace Center located in Yangon since this morning.

At this meeting, Col. Sai Ngern, the Leader of Framework Agreement on NCA Implementation Team, delivered the Opening Speech, expressed below:

First of all, I would like to express my warm greetings to you all, respected leaders and representatives from both the government and NCA-S EAOs, who attend this important second negotiation meeting.

We have learned that there was a positive outcome from the negotiation meeting, held yesterday by our respective teams, focusing on ceasefire related matters in order to strengthen the existing ceasefire mechanisms. The result of such productive outcome is a clear reflection of both the shared commitment to peace process and the concerted effort made by the negotiation teams from both sides. On behalf of the NCA-S EAO negotiation team, I would like to say how extremely honored and grateful I am to you all for such positive meeting result that you achieved yesterday.

At the first formal meeting between the government and NCA-S EAOs negotiation teams, we already exchanged our respective proposals and shared our views.  From today’s meeting, we would discuss as well as exchange our views on the respective proposals that we bring back in a greater detail including our joint future work plan and next steps that we need to undertake.

In line with the decision of the last JICM meeting, we also have to discuss specific timelines for each of the meetings and future plans that we have to undertake systematically. For instance, the meetings that we have to organize include UPJDC, UPDJC secretariat, working committee, national-level political dialogue, JMC, and JICM. So, we need to do a lot of systematic preparation for all these meetings.

When we discuss the agenda of preparing for ‘a framework for political dialogue review meeting’, we do need to discuss, and take into consideration of, this particular question of how, members of the EAOs that have not signed NCA, could participate in a framework review meeting that we will convene. In additions, we also have to discuss the holding of national-level political dialogue and public consultation we would organize from this two-day meeting.

As this is our only second formal negotiation meeting, and the fact that we need to keep in mind the importance of consolidating mutual trust between us, I believe that we also need to learn to skip or refrain from discussing some of the controversial issues that both of us are not ready for having a substantive and meaningful discussion at this stage.

Whatever issues we discuss, let us discuss and share our perspectives and views openly, respectfully, and patiently with the aim of achieving a positive result in line with the principle of upholding a Win-win solution for both sides that we need. As such, May I remind you to bear in mind that what we are jointly undertaking today is not just for our own individual or group benefits, but it is for the interests of our entire peoples and country that concern all of us.

In the commemoration service of the 73rd anniversary of the Union Day, the President of the Republic of the Union of Myanmar, His Excellency, President U Win Myint says, “We will make all efforts to secure a lasting peace without fail in line with the fact that obtaining peace for our country is the main priority of our government.” Likewise, State Counsellor, Her Excellency, Daw Aung San Suu Kyi also stresses in her remarks at the 73rd anniversary of the Union Day commemoration, “With the collective efforts of all of us, we will make concerted endeavor to obtain sustainable peace that is absolutely vital and necessary for our country”.  Also, in his official message sent to the ceremony of the 73rd anniversary of Shan State National day observed at Loi Tai Leng, the General Headquarters of the Restoration Council of Shan State, the Commander-in-Chief of the Myanmar Armed forces, Senior General Min Aung Hlaing also stated, “the door for peace and political dialogue has been open so that all ethnic nationalities can openly and freely negotiate their political demands and be able to find a solution for their political desires”. As highlighted in their respective remarks by Head of the state and leaders of the government above, if we, the negotiation teams from both sides meeting here today, are making concerted efforts consistently with courage, due diligence, determination, wisdom and perseverance hoping for the best interests for all ethnic groups, all of us and for our common union, I do believe that we can surely and certainly achieve a lasting peace and a genuine federal union that we all want and long for!

Thank you so much.