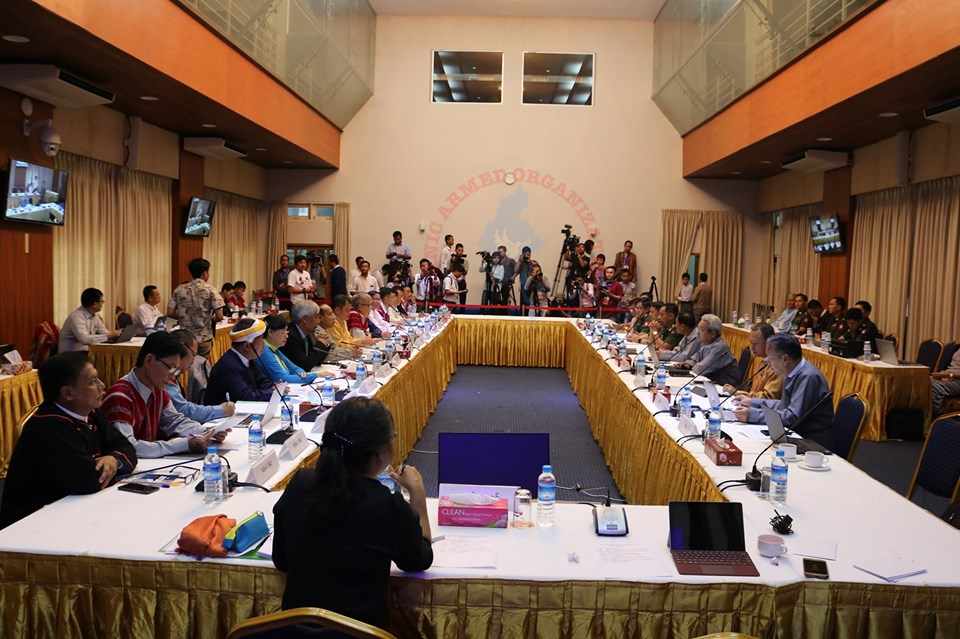 The Negotiation Meeting between Government’s Delegates and NCA-S EAO Negotiating Team is being held at National Reconciliation and Peace Center (NRPC), located in Shwe Li Street, Kamayut Township from 10 to 11 September.

I would like first to extend ‘Mingalabar’ to all those leaders who come to attend the negotiation.

I would like to thank especially leaders of NCA-S EAO and Peace Commission who tried to make this negotiation possible in spite of all kinds of problems.

With a view to achieving an enduring and sustainable peace, building a federal union, resumption of official negotiations, holding 21 Century Panglong conference in early 2020 and laying down a program for political dialogue by stages beyond 2020, we are going to coordinate frankly and openly in details the four peace processes proposed by the government and the points of the framework related to the Framework Agreement on NCA implementation which is prepared by NCA-S AEO through lengthy deliberations.  It is also necessary to discuss a situation for inclusiveness in the peace process.

It is incumbent upon all dialogue partners to cooperate in achieving good result that is fair and acceptable to all because this dialogue is precarious and delicate for the peace process. In negotiation, wishing to get the upper hand, wishing to profit from and wishing to win the other side by one side should not be in the forefront.  For the benefit of all people, we are joint owners of NCA, we are colleagues, we are on the same boat and we are fellow travelers. Only if we work together for finding ways and means for an answer, could we overcome our problems.

Since we had signed NCA with accountability and transparency, we should abide by the provisions of NCA without fail. It is absolutely untrue that “The NCA-S EAOs are embarking on the peace process outside of NCA” as some people or organizations believe. As it was clearly stated in the preamble of NCA that “We pledge to each other to work together to fully implement the provisions contained in NCA agreement successfully and without fail” I would like to conclude that we, NCA-S EAOs, stand unswervingly on our pledge. Thank you all.