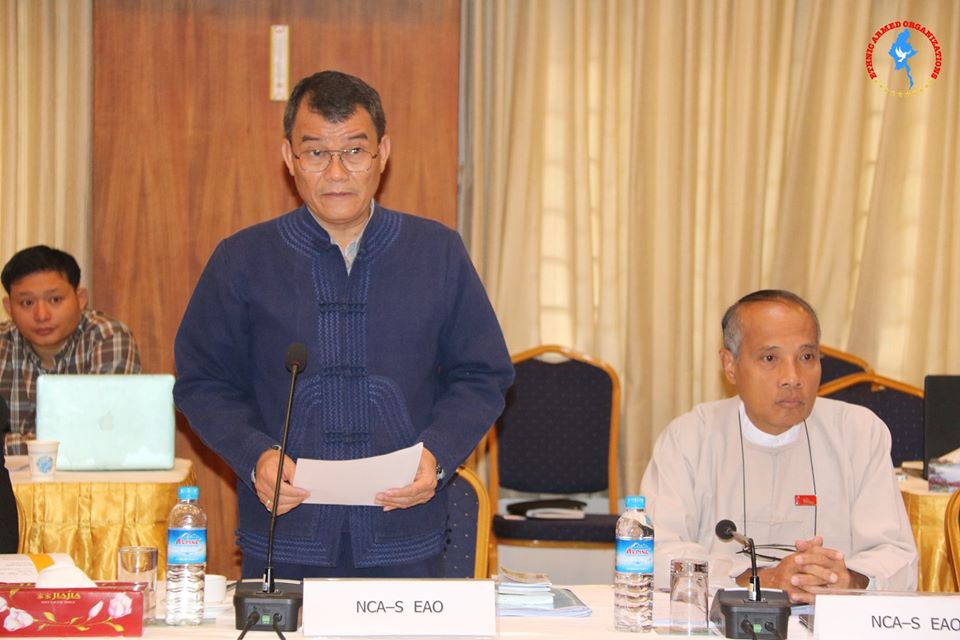 I would like to express my heartfelt gratitude to each and every one of you - leaders and representatives of the government and NCA-S EAOs - who have tried your level best in sharing your thoughts in order to achieve a good result from the last two days of our negotiation meeting.  With this note, I would like to acknowledge as well as appreciate all of your important contributions that made our meeting a success.

As a matter of fact, our two negotiating teams have achieved this important outcome that everyone wants to hear mainly because we discussed and negotiated all agendas at this two-day long formal meeting with the intention of serving the best interests for our Union that concerns all of us, and not our own individual or organizational interests.

It is very meaningful and helpful that we could form a small team of a joint working task force, comprises of representatives from both sides, which would lead the effort of creating a single text out of our two different proposals – the government and NCA-S EAOs- by looking at similarities as well as differences contained in our respective proposals. The formation of such working body is really helpful in a sense that it simplified as well as expedited the process of our discussion, and also allowed us to exchange our views on issues that we discussed in a greater detail. Moreover, I am very glad that we could manage to agree on our future work plan and activities we need to undertake jointly so that we can hold the fourth Union Peace Conference (21st century Panglong) in a timely manner.

From this second negotiation meeting, we could come up with mutual agreement on the specific timelines and detailed programs for each of the meetings that we are going to organize as it was already decided at the 8th JICM meeting.  What we have agreed includes holding various meetings such as UPDJC secretariat, UPDJC, Working Committee (WC), National-level political Dialogue, JMC and JICM continuously in order to convene the Union Peace Conference (UPC).

One other issue that we discussed at this meeting is the possibility of ways for members of the EAOs that have not signed NCA to  participate in the peace process.

As you all know, the top leaderships from both the government and NCA-S EAOs have given us this politically significant task of implementing as well as hammering out the detailed provisions of the 8-point agreement that they made at the last JICM meeting held on January 8, 2020. In line with the trust and confidence that our leaderships have bestowed upon us, we, the two negotiating teams from both sides have been carrying out our given task with the best abilities that we have with mutual trust, mutual recognition and respect, and a full sense of equal treatment between our two parties and patiently. In fact, it is with the joint effort from both teams in discussing as well as negotiating any issue with open-mindedness, honesty, and civility that we have now achieved an important outcome of a win-win solution for both sides and all of us from this particular negotiating meeting, which would be on the record.

Yes, we could make such a positive progress from this meeting mainly due to the fact that we could thoroughly negotiate any issue between us with a full sense of mutual respect, fair-mindedness, patience and understanding, mutual empathy, and readiness to make compromise when necessary.

With the collective effort of all of us, I do believe that we can definitely attain our shared goal of establishing a genuine federal Union that we want if we all give a priority to the common interests that we have in our Union, and come together to support the ongoing peace process relentlessly as opposed to prioritizing our individual, organizational, and ethnic interests.

In conclusion, as there is a prevalent outbreak of COVIT-19/ a coronavirus ongoing as you all know, may I encourage you all to be a bit more mindful of your own health by taking extra-cautionary actions necessary as you move and travel around!

Thank you very much!